Sawfish populations are receding to some of the most remote areas in northern Queensland. SARA works with sawfish in Queensland on a large geographic scale, and we are fortunate to have incredible partners that dedicate both time and money in conducting these surveys. In addition, crucial information comes from submissions from past and present fishers and their families. With sawfish becoming quite rare, these reports from citizen scientists are an important part of our assessment of sawfish range and distribution.

But what actually happens when a sawfish is caught in a commercial gill net? It is one thing to set one with the specific purpose of research – the team is trained in sawfish release and are prepared for the next steps. This is a different scenario when they wind up as by-catch. While sawfish are not readily seen to the sizes reported back in the 70s and 80s, animals around the 5m mark are still occasionally caught. Fishers report they thrash wildly, often becoming further and further ensnared. Evidence has shown that sawfish can last for hours in a net as long as it isn’t wrapped around their gills. However, once they are taken out of the water for removal they suffocate – hence their understandably severe reaction. How can commercial fishers release a sawfish in a matter of seconds, without causing injury to themselves, the net, and the sawfish?

Karumba is a small fishing town situated where the Norman river meets the Gulf of Carpentaria, truly the ‘outback by the sea.’ It is also the meeting place of the annual meeting of the Gulf of Carpentaria Commercial Fishermen Association Inc., which SARA was invited to attend this October. As the accidental by-catch and safe release of sawfish is likely the most dangerous occupational hazard for commercial gill netters, SARA held a unique contest asking fishers to showcase their handling skills. We got a first-hand look at how sawfish are removed from the net on the job. 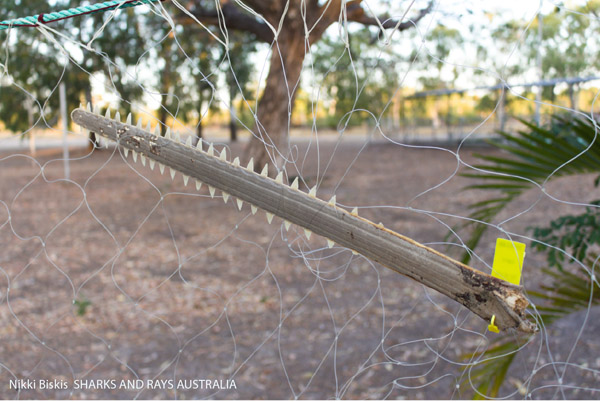 Anoxypristis saw entangled in a gill net, at the start of experimental trial. Image by Nikki Biskis, SARA

Through conversations with fishers we learned that many employ tonic immobility, where they flip the sawfish on their back to calm them. Many fishers had learned this on the job, and did not know that this technique had a name. All had amazing stories to tell of their experiences with sawfish – for example, some talked about seeing them hunt first hand. This behaviour in the wild has never been captured on video.

This is a first step in our initiative to develop materials to help train future fishers in the proper release of sawfish in the wild. In addition, it reiterates the importance of commercial fishers as sawfish advocates, potentially holding the key to their survival. Who better to safely tag and release sawfish than those who regularly handle them? Thirty years ago, this contest may well have been met with laughter – why not just shoot it? But nowadays, with fishers still active, who have seen sawfish numbers drop over the last decades, we can all work together to develop fishing practises to better protect the waterways and the crucial species living in it.

This project is funded by the Shark Conservation Fund.